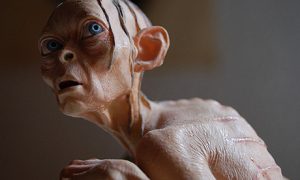 Previously I’ve written about the ‘Star Wars Error’ in grant writing, and my latest attempt to crowbar popular culture references into articles about grant writing mistakes is ‘the Gollum’. Gollum is a character from Lord of the Rings, a twisted, tortured figure – wicked and pitiable in equal measure. He’s an addict whose sole drive is possession of the Ring of Power, which he loves and hates with equal ferocity. A little like me and my thesis.

For current purposes, it’s his cry of “my precious!” and obsession with keeping the Ring for himself that I’m thinking of in terms of an analogy with research grant applicants, rather than (spoilers) eating raw fish, plunging into volcanoes, or murdering friends. Even in the current climate of ‘demand management’, internal peer review, and research development support, there are still researchers who treat their projects as their “precious” and are unable or unwilling to share them or to seek comment and feedback.

It’s easy to understand why – there’s the fear of being scooped and of someone else taking and using the idea. There’s the fear of public failure – with low success rates, a substantial majority of applications will be unsuccessful, and perhaps the thought is that if one is going to fail, few people should know about it. And let’s not pretend that internal review/filtering processes don’t at least raise questions about academic freedom.

But there are other fears. The first is about sabotage or interference from colleagues who might be opposed to the research, whether through ideological and methodological differences, or because they’re on the other side of some major scientific controversy. In my experience, this concern has been largely unfounded. I’ve been very fortunate to work with senior academics who are very clear about their role as internal reviewer, which is to further improve competitive applications and ideas, while filtering out or diverting uncompetitive ideas, or applications that simply aren’t ready. But while internal reviewers will have their views, I’ve not seen anyone let that power go to their heads.

Second, if the concern isn’t about integrity or (unconscious) bias, it might be about background or knowledge. One view I’ve encountered – mainly unspoken, but occasionally spoken and once shouted – is that no-one else at the institution has the expertise to review their proposal and therefore internal review is a waste of time.

It might well be true that no-one else internally has equivalent expertise to the applicant, and (apart from early career researchers) that’s to be expected and welcomed. But if it’s true internally, it might also be true of the external expert reviewers chosen by the funder, and it’s even more likely to be true of the people on the final decision-making panel. The chances are that the principal applicant on any major project is one of the leaders in that field, and even if she regards a handful of others as appropriate reviewers, there’s absolutely no guarantee that she’ll get them.

Ultimately, the purpose of a funding application is to convince expert peer reviewers from the same or cognate discipline and a much broader panel of distinguished scientists of the superior merits of your ideas and the greater significance of your research challenge compared to rival proposals. Because once the incompetent and the unfeasible have been weeded out – it’s all about significance.

A quality internal peer review process will mirror those conditions as closely as possible. It doesn’t matter that internal reviewer X isn’t from the same field and knows little about the topic – what’s of use to the applicant is what X makes of the application as a senior academic from another (sub)discipline. Can she understand the research challenges, why they’re significant and important? Does the application tell her exactly what the applicant proposes to do? What’s particularly valuable are creative misunderstandings – if an internal reviewer has misunderstood a key point or misinterpreted something, a wise applicant will return to the application and seek to identify the source of that misunderstanding and head it off, rather than just dismissing the feedback out of hand.

And that’s without touching on the value that research development support can add. People in my kind of role who may not be academics, but who have seen a great many grant applications over the years. People who aren’t academic experts, but who know when something isn’t clear, or doesn’t make sense to the intelligent lay person.

Most institutions that take research seriously will offer good support to their researchers. Despite this, there are still researchers who only engage with others where they absolutely must, and take little notice of feedback or experience during the grant application process. Do they really think that others are unworthy of gazing upon the magnificence of The Precious?

I’d like to urge them here to turn back, to take the advice and feedback that’s on offer, lest they end up wandering the dark places of the world, alone and unfunded.